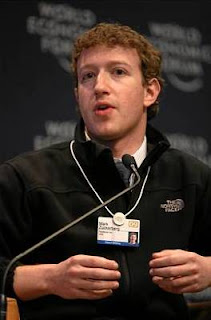 I'm really excited to talk to you about some of Facebook's new features. As I've said at previous keynotes, Facebook's mission is to give people the power to make the world more open, more connected, and more awkward. That sensation you got in high school when you stood in the corner of the cafeteria, eating while standing up to make it look like you were still in line-- Facebook will spread that like paste over the entire internet, and then we will put that paste in your pocket through our mobile initiative. We call it awkward pocket paste.

Let's talk about the website. The next step in the evolution of the site and the product is to give people more power and tools to share information and confuse their grandparents. Some of the infrastructure we're developing breaks new ground in the field of computer science, which is why we're hiring coders from across five continents and twelve geological strata to improve Facebook's core usability. Here are a few examples.

The news feed shows you the status updates that your friends have been posting to their Facebook profiles, such as the running tally of their cat's hairball expectorations. Now, in what order do we show these updates? Thanks to our new hires, Facebook can apply the latest and most sophisticated sorting algorithms to present you the specific updates that are most relevant and necessary to your life at the very moment you're checking Facebook, that is, while you're on the toilet with your iPhone. Any old coder can do a bubble sort or insertion sort, whatever those are, and if you ask me, they sound kind of dirty. Our software developers can code one thing extremely well, and that's randomness. I'm just going to call up on the screen here the news stream for a random keynote attendee-- how about you in the front row, Frederick Whipplesmith. You may protest at first, but once I broadcast your stream to the conference and all our online viewers, and also the international press corps that's in attendance, I think you'll be pretty impressed with what we can do.

So, here's Frederick's stream. Lots of updates from his friends about their cats' hairballs, with a few of photos of Frederick sporting a mankini while funnelling wine coolers. Okay, very cool. Now, click "most recent" in the upper right, where it says 373 new posts, and what do you get? 373 most recent posts? No. You get a random number of status updates and photos from an assortment of friends, non-friends, acquaintances, in-laws, and congressmen. Which is pretty neat, because randomness is hard, if not impossible to implement in computer code. Facebook is introducing new frontiers of randomness to privacy, interface settings, news feed selection, and soap warehousing. That last thing? Random.

Think it's easy to be random? Go ahead, try it right now-- think of something random and post it to your Facebook status. Guess what, it's exactly the same thing as you posted yesterday, about how your landlady refuses to replace your broken recycle bin. Very original. That's not random. You clearly don't have what it takes to work at Facebook.

The next issue I want to talk about is data portability. Now, I'm really glad we've hired developers who specialize in coding computer software, because this is something we couldn't have done (or even known about) without them. What is data portability? That's an excellent question, and instead of answering, I'll give you an example. All of the data that you provide to Facebook-- your photos, messages, web surfing habits, and dental records-- all of those things are like little precious gemstones that we hoard in an undisclosed location as part of a policy we call Operation Marketer's Wet Dream. These gemstones belong to Facebook, and we can string them into necklaces that we wear while working nude in our offices. Those offices used to be in Palo Alto, but as you know we've recently moved to Menlo Park, and if your privacy gemstones weren't portable, they would have strangled our necks while we were loading the moving van with hard-copies of your frathouse bender photos. Clearly, data portability is very important, even if it isn't random.

So there you have it-- Facebook's latest changes and updates. Some of them will move the social landscape underneath uncharted waters of creepy awkwardness, which is pretty cool. If you're a software developer, and if your speciality is computer code in particular, then Facebook would be interested in looking at your résumé. Don't bother submitting it, really. Just keep it on your hard drive somewhere, or print it out and leave it on your office desk in view of your webcam. We'll get to it eventually.
Posted by Pharaohmagnetic at 7:40 AM No comments:

Of course Rupert Murdoch is evil. This shouldn't be surprising. Let's analyze his name.

First, your cartoon evil genius name needs a good suffix. -ock, -ok, and -och are all variant spellings of a classic with long, demonstrable history of Sinistrosity:

Then, you need a stem on which to append that suffix. Evil-sounding nouns are all good candidates. Hate, Death, Hell, Crime, or in a nice self-referential twist, Evil. But to really cap off your evil cartoon genius, you just can't beat an evil-sounding adjective. Maim, kill, rape, belch-- I think we can all agree that those are evil verbs. But across all cultures, times, and places, no evil activity is more universal than murder, which is why I suggest appending the evil suffix "-och" to the evil stem "murd." Murdoch. Now that sounds evil!

How about a first name? Here it gets complicated. Even in the case of cartoon villainy, you don't want your genius to fall victim to overkill. That's why there aren't many badguys named Evilman Killestro or Hatebringer Deathovich. Evil geniuses should have that element of genteel panache to them, like Professor Moriarty, or Dr. Evil, whose first name, "Dr." connotes many long years of study at evil medical school, as he would be quick to point out.

Overkill avoidance is therefore the reason why your evil cartoon genius must have a boring, whitebread, WASPy name. In naming our cartoon evil genius, we must employ Chiaroscuro, the method of the Italian masters, in which bold contrasts between light and dark heighten the impact of the composition. To highlight the patent evil of the surname, the first name should sound elegant and refined, such as James, Winston, Preston, or Huntington. Be careful not to employ the diminutive version of these names, because that will immediately convert your genteel evil genius into a superhero, or worse, a hero's childlike bubbly sidekick. Following the the above examples, no super villain should ever have a first name like Jimmy, Winnie, Presto, or Hunt-Hunt. So forget that. Ignore the diminutive temptation. If you stick with high-falutin' pretentiousness, such as an English adaptation of the German name Hroberahtus which itself is a variant of Robert, you should be set.

And that's why, when it comes to evil cartoon geniuses, Rupert Murdoch takes the cake. Without paying for it. Because that's stealing. And it's what evil geniuses do.
Posted by Pharaohmagnetic at 1:32 PM No comments:

Here on Shiny Things Distract Us (STDU), we report on those shiny things... that distract us. An example: STDU distracts us!

(via Lifehacker)
Posted by Pharaohmagnetic at 4:44 PM No comments:

My wife and I had a Bad Poetry Competition the other day; 10 minutes to write an impromptu dash of doggerel so eye-wateringly bad that the reader would have no choice but to commit suicide. You have been warned! Here are our entries. Who won?

"Poem 1"
By Pharaohmagnetic's wife, aka "A wench in the works"

The VitaMix
Is no arbiter
Of degrees of miscegenation
Whether things float to the top and are pushed down
Or incorporate in a smooth, foamy, emulsification
It cannot show you the way out.

Turbulent hyperbole engorges on me verbally
While silent flights of guile
Bestride the islands of my mind.
Vanity, insanity are unto me profanity
Where more can see the side of me
Inside the violent brine.
Are thunder-tossed belittlements a little brittle
ever since
The fissures of the tissue in my brain
filled up with spit?
I cannot bluff or cough enough
to underseat the powder puff
that whittles at the spittle that exuberates my eyes.

More bad poetry featured on Shiny Things Distract Us: Here, here, and here.
Posted by Pharaohmagnetic at 12:26 PM No comments:

"I am the author of all things"

Here on Shiny Things Distract Us, Fraxas is the real Code-Wizard-Software-Developer-Computer-Programmer guy; I'm just a meatspace lab monkey. What limited experience I have with the world of algorithms and other abstractions comes from my occasional use of Mathematica to model data or solve the Python Challenge. I really love Mathematica; it's fun and easy to tool around with. If I had learned to code with Mathematica, rather than the tooth-cracking monstrosity that is C++ or Motorola 6800 machine language, I might have discovered enough enjoyment to find a calling. Oh well! Back to the soldering iron.

I've blogged (if tangentially) about Mathematica and its creator, Stephen Wolfram, before. His latest project, Wolfram Alpha, has been picking up a lot of buzz, and I'm very excited to try it out next month or so. (Here are two Slashdot posts on the subject: 1, 2.)

Stephen Wolfram's outsize ego, as made physical in the sheer mass and pagecount (1197) of his vanity-published book A New Kind of Science, is the source of much controversy. Basically, he argues that all of science and nature can be explained by simple cellular automata, a claim that may be neither New nor a Kind of Science. Nevertheless, I find Wolfram fascinating and amusing all at once, and I thank him for bringing Mathematica to the world.

But this is the best take-down of him, or anyone, that I have ever read. Hilarious:

bixx456's review of A New Kind of Science from Amazon.com.

More on Alpha below:

Posted by Pharaohmagnetic at 2:12 PM No comments:

Quote of the Day

“Hey, you self-important humorless lemon-sucking purveyor of unrelenting grimness and despair: lighten up a bit, why don’t you?”

I think I just found my new catchphrase.

Sheesh. There's a lot of hyper-literal, overwrought killjoys on the internet, wasting opportunities for a perfectly good pun(ishment).
Posted by Pharaohmagnetic at 6:59 PM 2 comments: